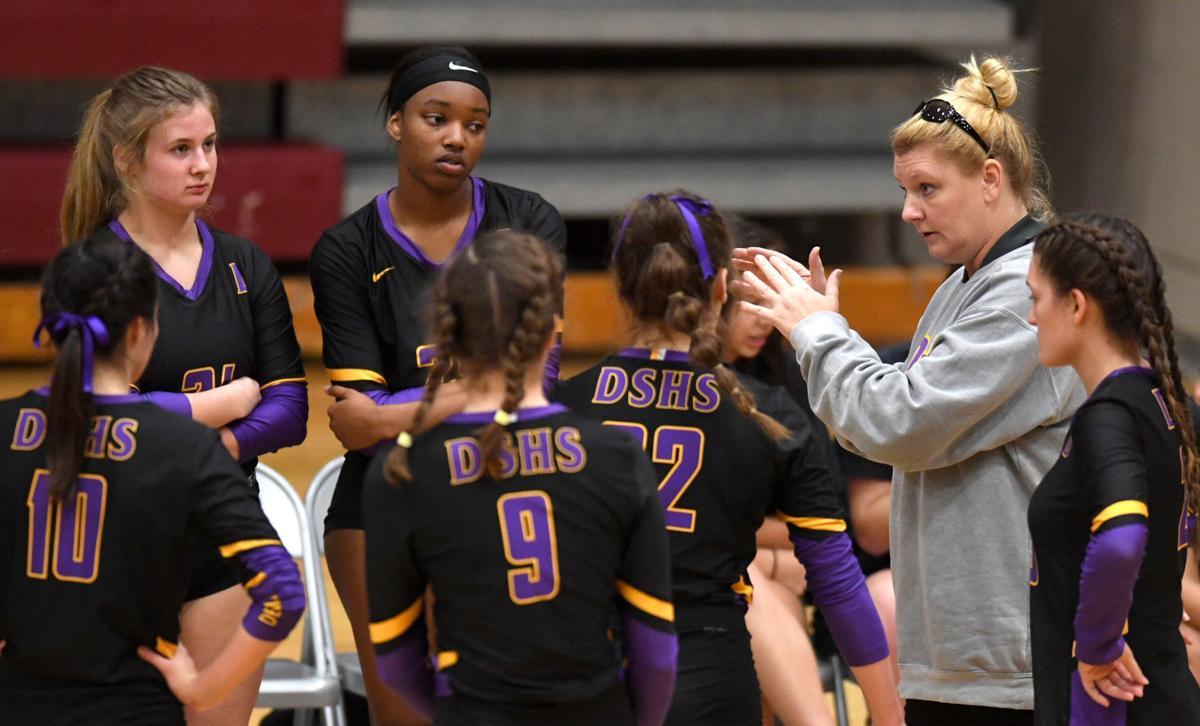 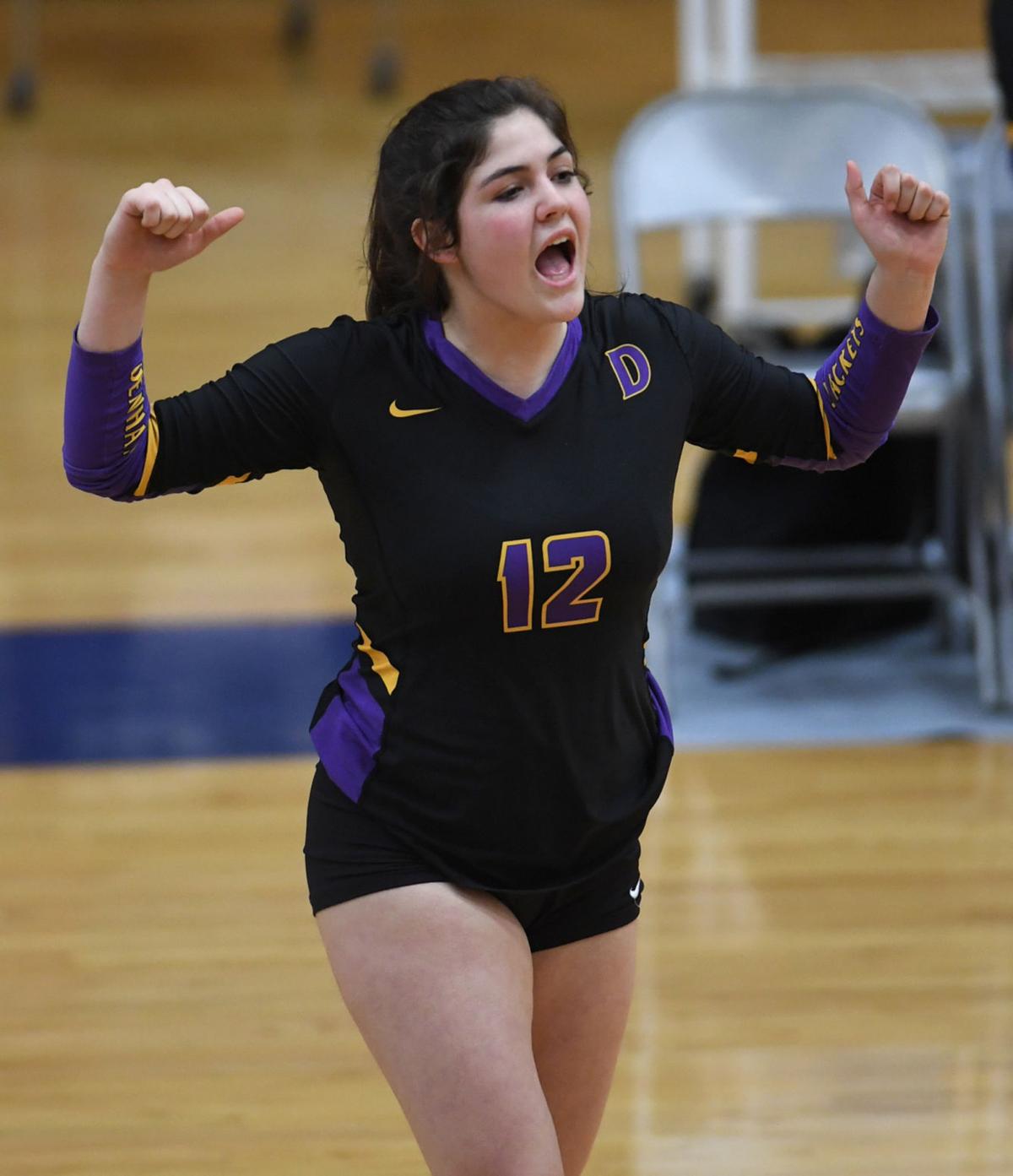 Denham Springs’ Brinley Williamson (12) celebrates a point made with her team. 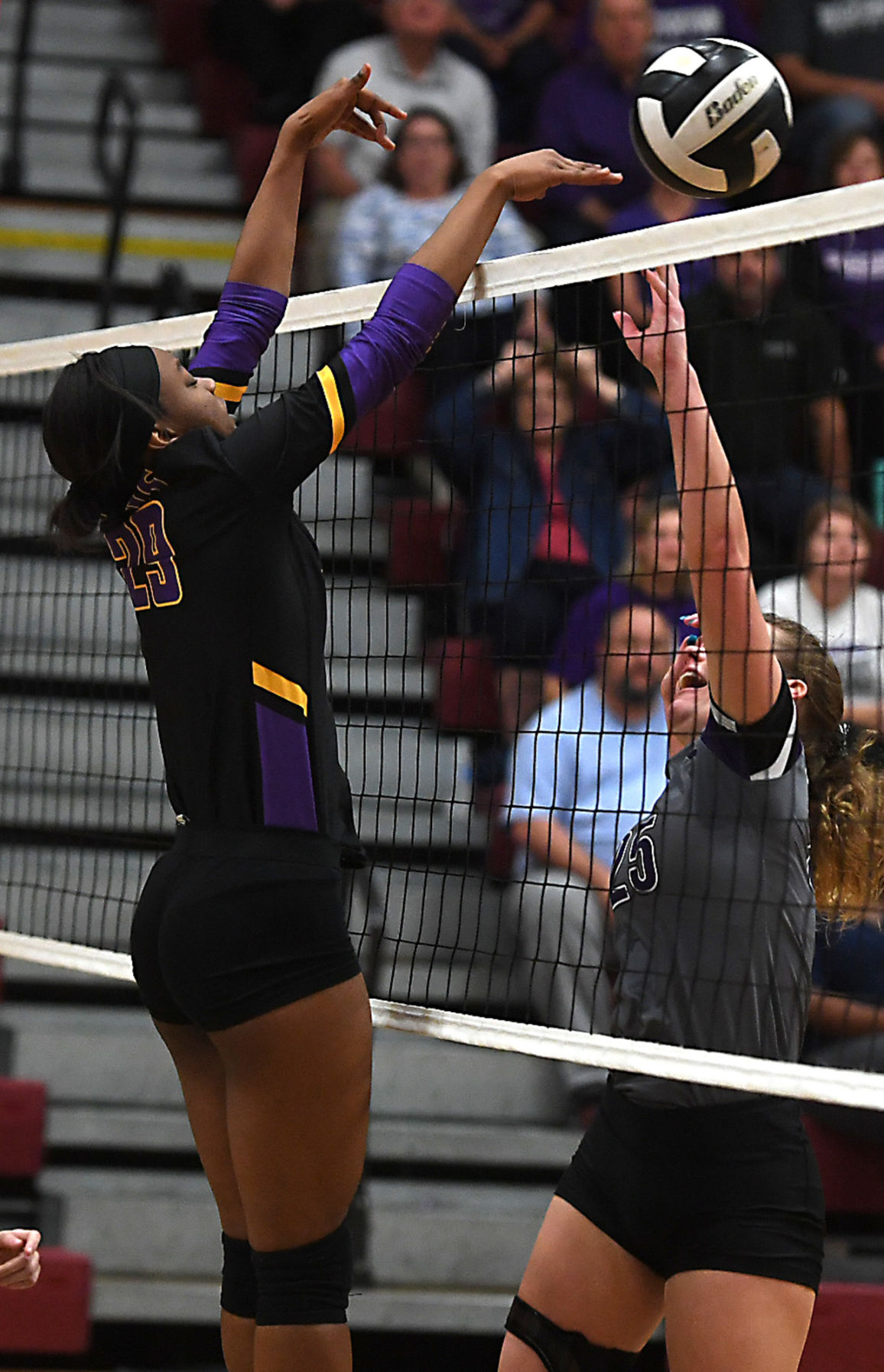 Denham Springs’ Arlivia Ross (29) taps the ball over the net against Dutchtown's defense.

DUTCHTOWN – Not long after meeting with her team for the final time this season Denham Springs volleyball coach Pam Dubuy’s thoughts turned to next season.

She was already looking at the possibilities of how her No. 29 Lady Jackets could close the gap on such teams as fourth-seeded Dutchtown, which eliminated her team 25-13, 25-16, 25-13 from the Division I state playoffs Thursday in a match played at Dutchtown High School.

“I’ve already talked to some parents and encouraged them to play club,” Dubuy of offseason club volleyball. “The teams we’re losing to have a core of players, the ones even on the bench, are all club players. I’m getting more and more girls involved in that. They’re starting at a later age and that gap is there. We’re trying to close that gap and hopefully one day we can.”

Junior Kailey Dunham is one such player that benefits from playing for Volleyball Baton Rouge. She’s hopeful that more of her teammates will do the same in hopes gaining a competitive advantage against their tougher competition in district and when they reached postseason play.

“Club plays a big role,” she said. “The year before we had four playing. This past season we had eight. It’s really helped a lot.”

Denham Springs (16-21) competed on even terms with Dutchtown, a state semifinalist a year ago, through the early stages of the first two sets before losing traction because of unforced errors.

The Lady Jackets forced three ties and trailed 7-6 in the opening set after Faircloth’s kill when the Lady Griffins (33-7) distanced themselves with an 11-2 run that included three hitting errors to make it 18-8.

“We came in knowing what to expect because we’d seen them a number of times,” Dubuy said. “They were still a little tight and nervous. They started off strong and got to a certain point where we got on our on heels and not playing to our potential.”

Dutchtown also featured a well-rounded attack, making it tough at the net for Denham Springs to defend the much taller Lady Griffins’ array of hitters.

Taylor Heeb served three points to put Dutchtown up 23-10 before Faircloth’s kill broke her serve, but Denham Springs was unable to capitalize on a kill from Arlivia Ross when a service error closed out the set.

“The errors are what hurt us,” Dunham said. “We were nervous, played timid and that played a part in it. I think we needed to be more confident.”

DSHS was called for doubles – or two hits – four times in the first set and wound up with 10 such violations.

A combination block from Donohue and Beatty provided the Lady Jackets with a 1-0 lead in the second set which went on to include a pair of ties when an attack went long and gave Dutchtown a 6-4 margin.

DSHS remained close, trailing 8-5, after Mallory Landry assisted Faircloth for a kill, when Dutchtown reeled off an 11-4 run to extend its lead to 18-9 after Jaela Drumgole’s push shot.

The Lady Jackets got within 18-13 during Donohue’s serve that included a kill from Ross and a wide return from the Lady Griffins, who got a pair of kills from Alexis Logarbo to finish off the set.

Dutchtown, which won its eighth straight match, continued its momentum by bolting to an 11-2 lead in the final set on Heeb’s service that featured a pair of aces.

The Lady Griffins made it 16-4 after a net violation when a kill from Haleigh Qualls ended the match and the careers of four Lady Jackets – Faircloth, Brinley Williamson, Mallorie Digirolamo and Morgan Claire Smith.

“They put up a hard fight, I was very proud of the defense,” Dubuy said. “They (Dutchtown) played great. I think our biggest downfalls were the errors and not being aggressive at the net.”