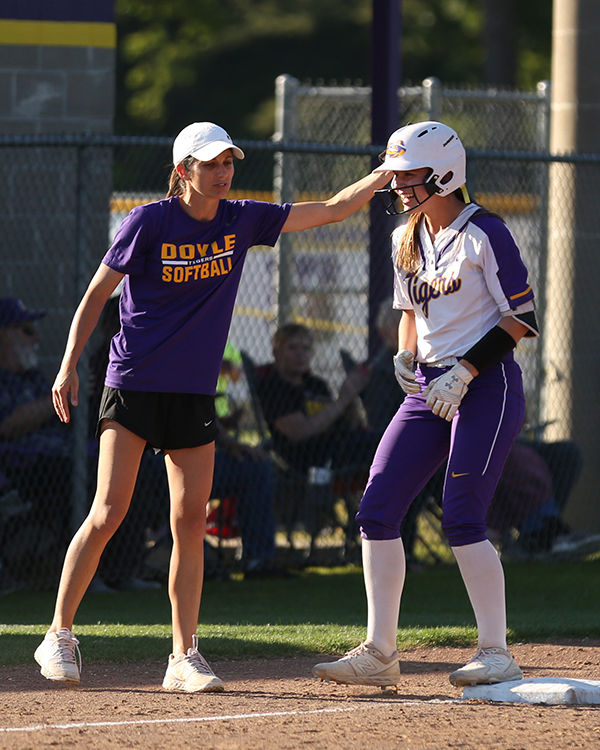 Doyle's Elise Jones is all smiles as she gets congratulated by Lady Tigers coach Amanda Decell a triple against Ville Platte. 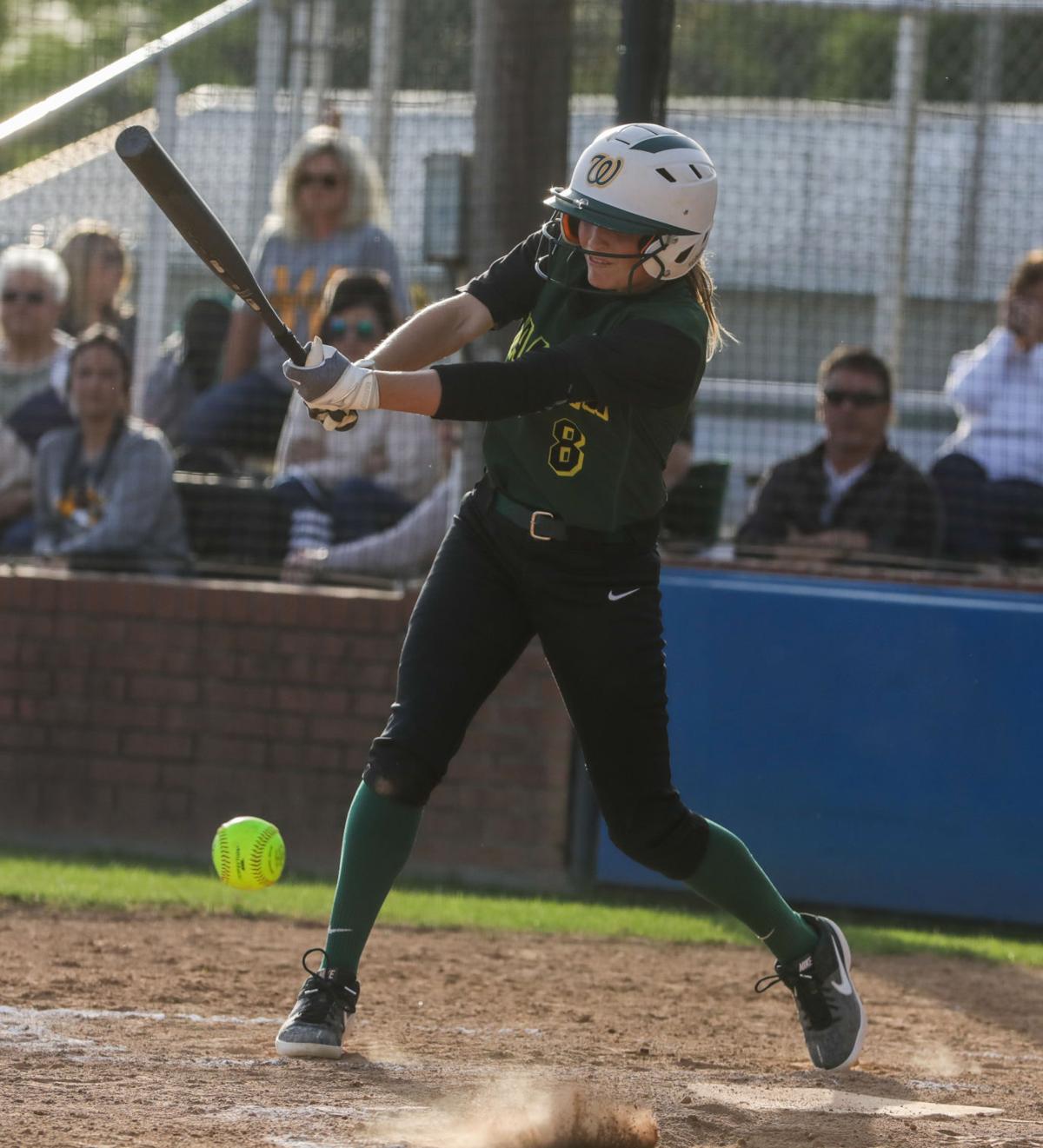 Walker High first baseman Ryann Schexnayder fouls off a pitch down the third base-line. She gave up three hits, one run and struck out six in 4.1 innings of relief in Monday's 6-0 loss to Doyle.

Doyle's Elise Jones is all smiles as she gets congratulated by Lady Tigers coach Amanda Decell a triple against Ville Platte.

Walker High first baseman Ryann Schexnayder fouls off a pitch down the third base-line. She gave up three hits, one run and struck out six in 4.1 innings of relief in Monday's 6-0 loss to Doyle.

Jones, who helped the school’s girls basketball team win a Class 2A state championship on Saturday and came away with the game's Most Outstanding Player award from the championship game in the process, hit a solo home run to left field in the fifth inning, capping the scoring in the Lady Tigers’ 6-0 win over Walker on Monday at Johnny Sartwell Park.

“It’s just been the best days of my life,” said Jones, who said she put in a softball workout Sunday after the Lady Tigers returned from Lake Charles late Saturday. “It’s just unreal how great these last few days have been.”

Jones’ home run came after Doyle put together a five-run second inning in which the Lady Tigers scored two runs on a baserunning error.

“We created our own runs today, but I thought our mentality at the plate was really, really good,” Doyle coach Amanda Decell said after her team moved to 7-1. “Both pitchers for Walker threw very well, and I thought we handled them at the plate. We had really good at-bats, so I was proud of that.”

“We had one bad inning, and then we didn’t make the adjustments at the plate,” Walker coach Hali Fletcher said after her team dropped to 4-5. “That about sums it up. Doyle came out, they hit the ball well, and we did not adjust at the plate.”

After walks to Kassidy Rivero and Bailey Mclin loaded the bases, Taylor scored on Addison Cortono’s sacrifice fly to left field for a 2-0 lead.

Kaitlyn Savant walked to load the bases again, and Madison Diaville singled to left to bring in another run. Diaville was almost to second and got caught in a rundown, allowing two more runs to score for a 5-0 lead.

“I didn’t see the runner was still at second until she came back, and then I realized that there was no going back, so all I could do was get in a rundown and let the runs score and make them make mistakes off my mistake,” Diaville said.

At that point, Fletcher lifted starter Lainee Bailey for Ryann Schexnayder, who struck out Jones to end the inning.

“That was really nerve-wracking for me because usually they put me in in the fourth or fifth inning …,” Schexnayder said. “Coming in in the second … I wasn’t ready at all. I was kind of like, ‘OK, going in’, and I just had to switch my mindset from (playing) first (base) to pitcher.”

Schexnayder gave up three hits, one run and struck out six in 4.1 innings of relief, with the only run coming on Jones’ home run with one out in the fifth inning.

“My first two-at bats, I didn’t do as well as I thought I was going to do, and then that third at-bat, I was just going up there thinking, ‘Let me just hit it hard and see how it goes. I’ve got nothing to lose. I’m already 0-for-2.’ I did it, and it worked out,” Jones said of the home run.

Meanwhile, Olivier held Walker in check while throwing a three-hitter with six strikeouts and two walks.

“I just had to make sure I hit my spots because I know this team can come out and hit the ball, and I know my defense is backing me up, so I just do my job on the mound and let my defense and offense do the rest,” Olivier said. “I’ve just got to let the last play go and focus on my next pitch.”

Said Fletcher: “We took a lot of strikes that we normally don’t do. We’re normally pretty aggressive at the plate. Marley did a great job on the mound. She worked in and out, kept some of the girls off balance. She did a great job. We just didn’t make the adjustments at the plate that I know that they’re capable of doing.”

After giving up a single to Savanah Stafford to start the game, Bailey had a two-out double in the second, but both times Walker was unable to capitalize.

Walker’s only other hit came on Stafford’s single past a diving Jones at third to lead off the sixth, but Olivier retired the next three batters to get out of the inning.

“I think the biggest thing for us was Marley on the mound,” Decell said. “She was phenomenal. That was one of the best games I’ve seen her throw – first-pitch strikes to almost every batter. She was impressive – made defense easy.”

Is Doyle the only softball team playing in the Parish?