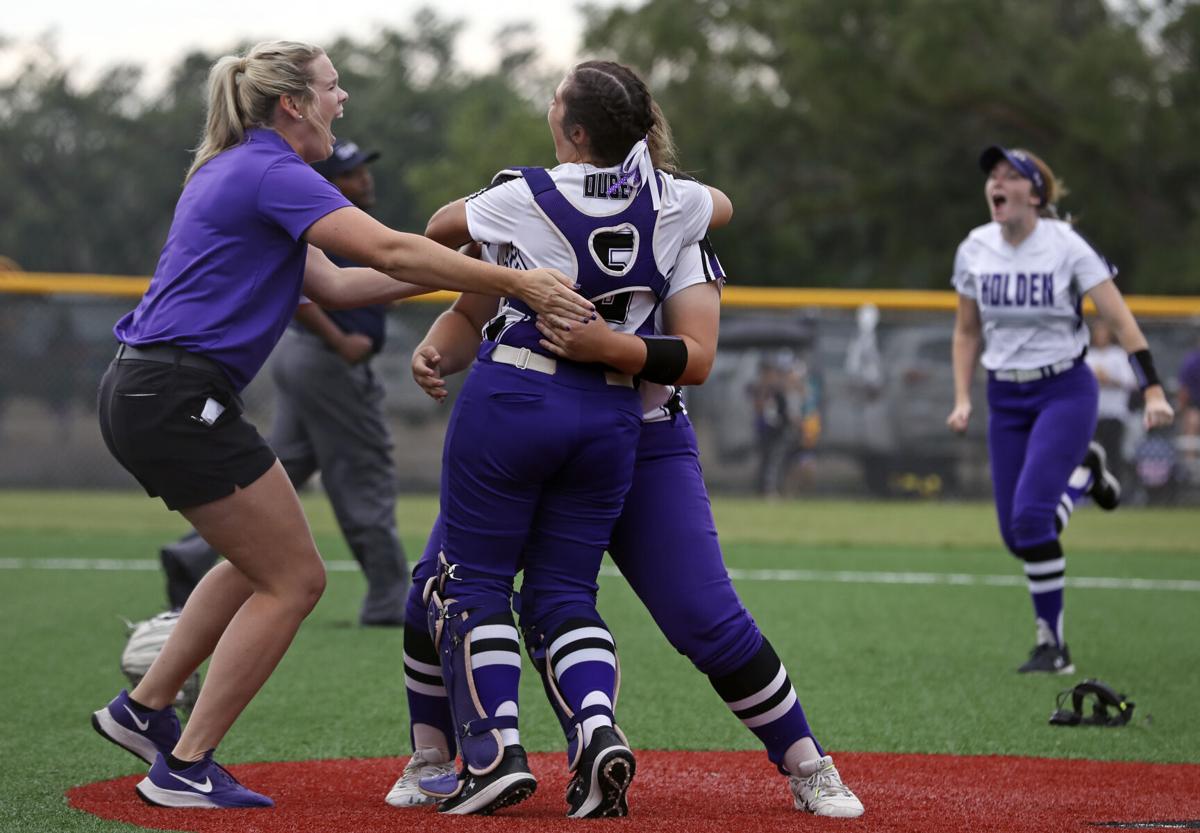 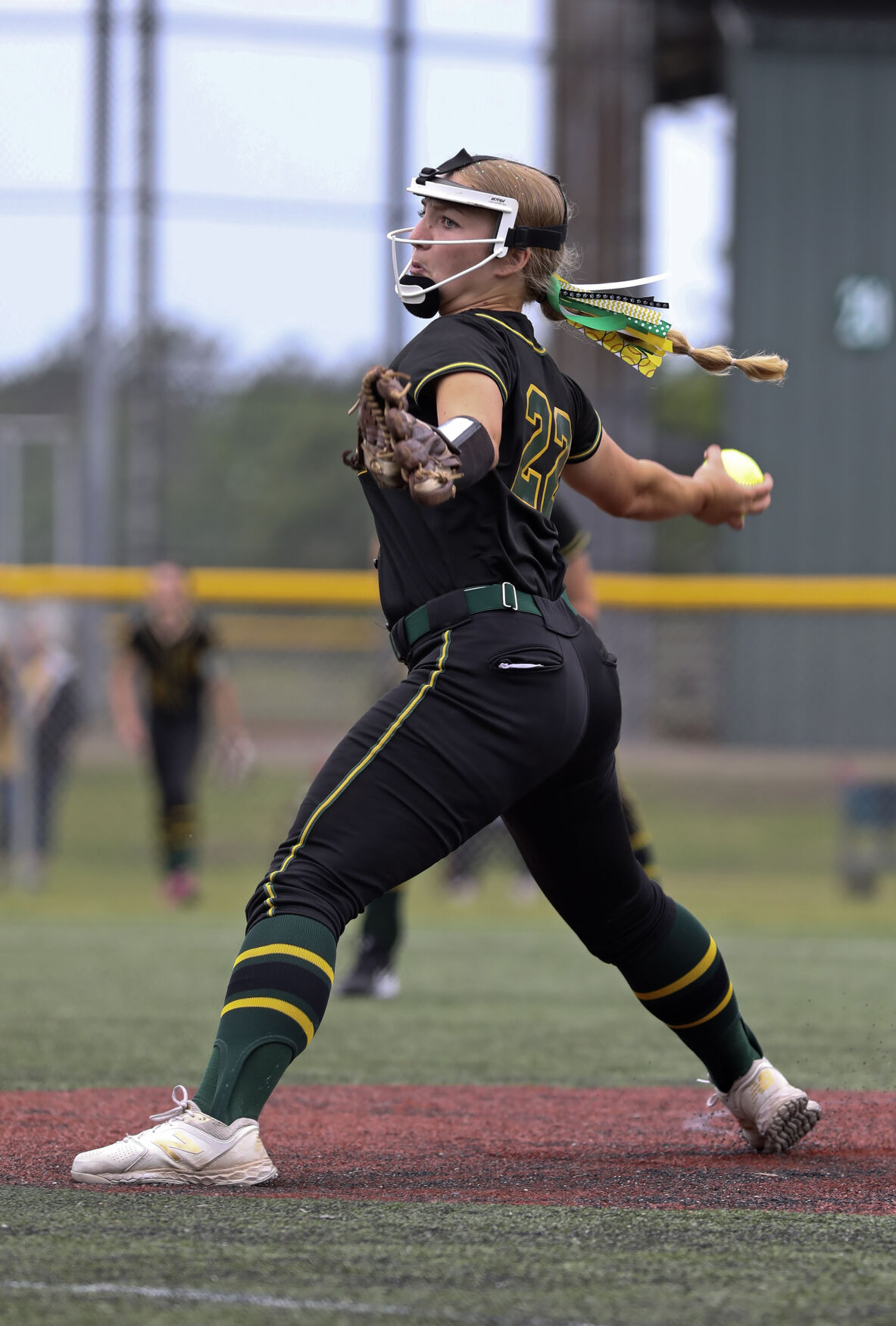 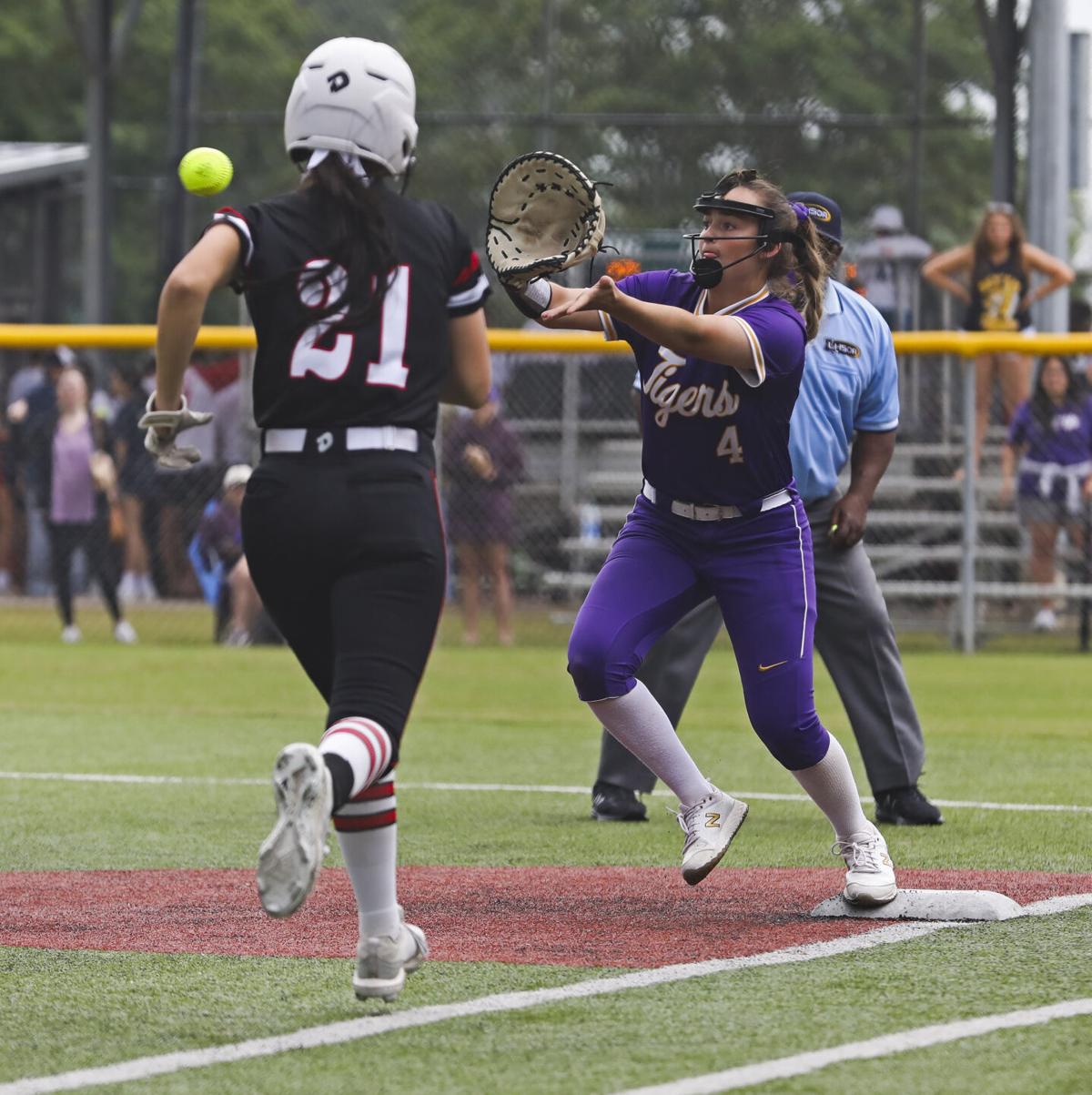 Doyle first baseman Kaitlyn Savant (4) watches in a ball to force out Many’s Makynli Miller (21) during the Class 2A state championship game on Saturday, May 1, 2021.

SULPHUR – Another softball season has come and gone, and as always, it seems like it just started.

It wasn’t long ago teams were trying to find their identities in an effort to put together a run to Sulphur that the COVID-19 pandemic denied them last season.

Once again, Sulphur didn’t disappoint, and this time in face of some seemingly long odds.

The area was devastated by Hurricanes Laura and Delta last year and dealt with February’s freezing temperatures in the midst of those recovery efforts.

The bottom line is the Lake Charles/Sulphur area is nowhere near at 100 percent. The blue tarps on the tops of houses and businesses are now part of the skyline while entering the area from the interstate, and structure damage is visible all over the area, with many service stations and businesses just hulls of twisted metal.

That might have been enough for the folks in Sulphur to ask the Louisiana High School Athletic Association to look for a new home for the state tournament, at least temporarily. That didn’t happen, and we’re all better for it.

If we’ve learned anything over the past year, it’s that things we can’t control happen. It’s how we deal with them that determines how things play out.

Part of the high school softball experience is getting to play in Sulphur if your team is fortunate enough to make it to the state tournament, and after missing out on last season’s event, the folks in Sulphur made sure these athletes got to experience at that is Frasch Park this year.

After a year away, nothing changed. The crowds were big and boisterous, and of course there was good softball.

For the three Livingston Parish teams involved, it was a decidedly mixed bag of results.

In Holden’s case, it’s a fourth straight state championship, and while it’s tough to call programs dynasties, it might be something to consider with the Lady Rockets.

Holden lost in the championship game in 2016 but came back to win three straight titles behind a nucleus of catcher Ashley Fogg, Emma Hutchinson and Olivia Lackie. That trio, who were seniors last season, didn’t get a chance to win another title, and there’s no doubt this season’s team had that on their minds.

Fogg had her former team in mind too, as she was in the stands watching the championship game.

Taylor Douglas did what she did all season, giving the Lady Rockets a steady presence in the circle, while providing power at the plate. She finished with 27 home runs this season, and her home run in the 12-11 semifinal win over Florien last Thursday bounced off the roof of a dugout on the field the Lady Rockets won the state championship on Saturday.

Sometimes things happen for a reason, and maybe that was a sign of things to come for Holden.

In the championship game, the Lady Rockets put together an eight-run third inning in which they sent 13 batters to the plate, getting eight hits, including two each from Gracie Duffy, Kacey Breithaupt and Anna Hutchinson.

The championship game win was the 100th of Holden coach Linzey Bowers’ career, and it took everyone to get there.

With the majority of the current team back in the fold, it’s safe to say the Lady Rockets are hoping to have more championship celebrations in Sulphur in the future.

For French Settlement, the trip to Sulphur was one to grow on.

The Lady Lions came into the to tournament as the No. 12 seed, and if they had any nerves heading into their semifinal game with No. 1 Many, they didn’t show early as the Lady Lions battled back from a 1-0 deficit to tie the game.

Many got six runs in the third, but FSHS rallied for four in the fourth to keep the game close before the Lady Tigers put together a six-run fourth and ended the game on Kaley Koss’ three-run home run.

The loss doesn’t look good on paper, but maybe that’s not what the Lady Lions’ trip to Sulphur was about. Sure, Blake West and his team wanted to win the game, but playing in a state tournament game is something different, and part of the challenge is adapting to what can be an intimidating environment if you’ve never experienced it before.

There’s no guarantee the Lady Lions will get a return trip to the state tournament, but they are in good shape to get there. The team loses just one senior in outfielder Blair Henderson, meaning its core group, including pitchers Emma Petite and Katie Harper, infielders Claire Cullen and Stella Allison and catcher Carmella Tranchina, will be back.

That’s why this trip to Sulphur could work in the Lady Lions’ favor. They’ve got a state tournament game under their collective belt, so if there is another one in their future, that part is out of the way.

Meanwhile, the end of the season for Doyle was one of sadness, not because the Lady Tigers didn’t play well in the tournament but more because the team’s 4-2 loss to Many in the championship game was the end of the careers of a group of seniors who helped build the program.

Elise Jones, who had a sacrifice fly to score Addison Contorno in the bottom of the eighth inning in the Lady Tigers’ 1-0 win over Rosepine in the semifinals, had a solo home run to lead off the second inning, while KK Savant drove in Chloe Welda for a 2-0 lead in the fourth in the championship game against Many.

Meanwhile, Doyle pitcher Marley Olivier held Many’s powerful offense in check and didn’t give up a hit until the fifth inning. But Many did what Many does in the sixth, putting together six straight singles to pull ahead 4-2 and win the state title.

All of the key players in Doyle’s key moments in the championship game were seniors, minus Contorno, who is a sophomore, and that’s fitting.

Doyle’s seniors won a state championship as freshmen in 2018 with the idea they’d be back a few more times before their time in high school was done.

A strange loss in the quarterfinals ended that for Doyle in 2019, and COVID-19 put the breaks on every team’s season in 2020, making this run to Sulphur the last for this Doyle group regardless of the outcome.

There’s nothing wrong with coming home with a state runner-up trophy, but when a team is playing for a state championship, the goal is to win it all. Add in the fact that this was the last run for a group of seniors who helped lay the foundation of the Doyle program, and it made for a very sobering postgame experience.

The emotions were heavy and raw, with Jones, Savant and Olivier doing postgame interviews through tears as teammates consoled each other.

For those players, and those returning, the loss will likely sting for a while. It will likely motivate all of them, and that’s OK.

These athletes made memories in Sulphur, and good or bad, they’ll never forget them. Maybe that’s the most important goal of high school athletics.