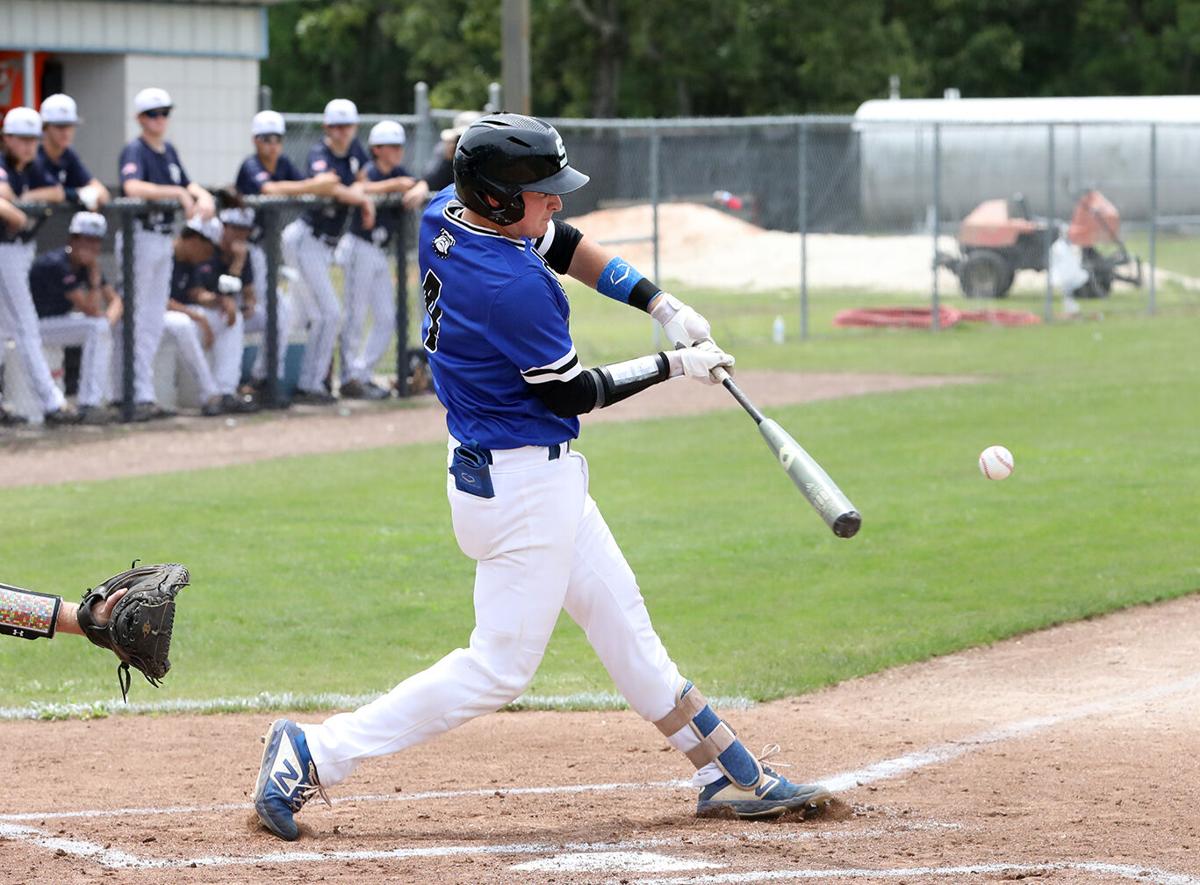 Springfield High’s Logan Lobell swings at a pitch during the second game of the Bulldogs’ regional playoff match against D'Arbonne Woods Charter on Saturday, May 1, 2021. 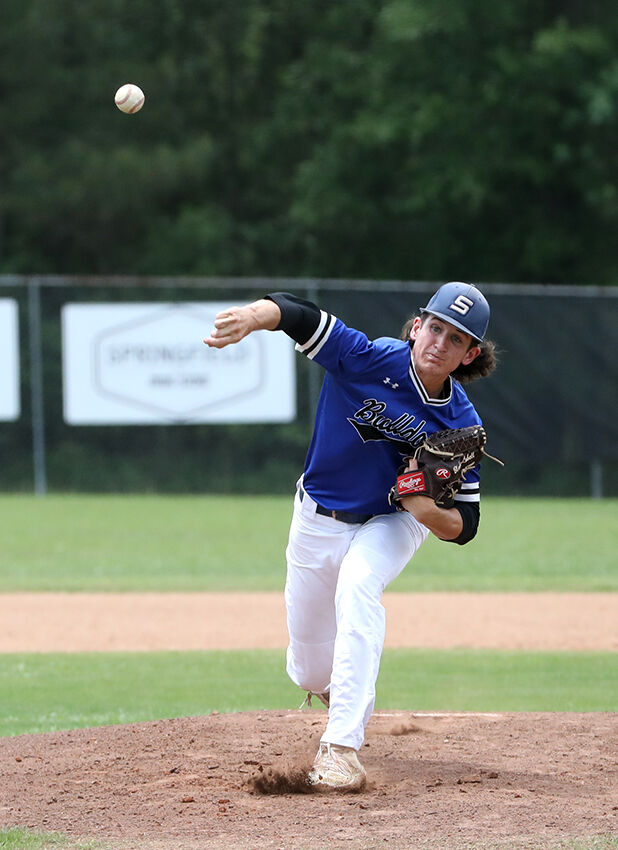 Springfield High’s Blake Lobell throws a pitch during the second game of the Bulldogs’ regional playoff match against D'Arbonne Woods Charter on Saturday, May 1, 2021.

Springfield High’s Logan Lobell swings at a pitch during the second game of the Bulldogs’ regional playoff match against D'Arbonne Woods Charter on Saturday, May 1, 2021.

Springfield High’s Blake Lobell throws a pitch during the second game of the Bulldogs’ regional playoff match against D'Arbonne Woods Charter on Saturday, May 1, 2021.

Two key pieces to the Springfield baseball team’s run to the Class 2A quarterfinals recently made their college choices.

Neither one of them is resting after making their decisions.

“Everyone always thinks, ‘hey, you committed. This is where the work is finally put in and done,’” Blake Lobell, who will be a senior, said. “But this is only the beginning. Work has just started.”

The brothers were headed to a tournament in Hoover, Ala., and Logan Lobell realizes what’s ahead of him once the summer season ends.

“I just want to finish this week,” he said. “This is my last tournament this week … and then after that, I want to hit the weight room a little bit more. I’ve been in there a good bit, but the biggest difference between me and some of the guys that have already been there (at BPCC) for a year is they’re just going to be bigger and stronger, so I want to be able to attempt to catch up to them and not be as far behind once we get in the weight room in the fall, and once I get to Bossier, be able to focus on my grades and keep my grades up and just at practice, give them all I’ve got.”

Logan Lobell, who just graduated, said he went from having one offer to getting invitations from five schools to tour their campuses. Logan Lobell, a catcher, said Bossier Parish originally contacted Blake Lobell but things moved quickly from there.

“Through watching all of Blake’s stuff, they saw me in all his videos and asked if me and Blake could both go up there and do a little workout with them and tour their campus, so me, Blake and another Springfield player, Sladen Lyles, all went up there and did a workout for the day and all had very good days,” Logan Lobell said. “Then after that, we talked to the coaches a lot, toured the campus. They showed us around, and I took some time to think about it and went and looked at a few other colleges, but it was very hard for me to not want to go to Bossier. It’s very nice up there with the campus and the facilities. I think that’s going to be my best shot for playing time and being able to hopefully get me to a four-year (school) after that.”

“They said I looked good in receiving and being able to steal strikes for pitchers, and that I looked like I handled Blake very well, so then I was able to send them some more videos of me catching guys like Andrew Yuratich, who graduated from Doyle and is now going to Southeastern, and just how I handled guys like that,” he said. “They liked to see that.”

“He’s a very good defensive catcher,” Blanchard said. “I would say he’s one of the better defensive catchers in the area. He’s solid at the plate. He’s just a fundamentally sound baseball player, and he’ll only get better with more coaching and instruction and teaching. There was no doubt in my mind that he should go somewhere and play college baseball. He’s that type of kid. On top of all that, he’s one of the hardest-working kids that you’ll find.”

Logan Lobell, who was a first-team All-Parish selection and second-team All-District 10-2A choice, said he’ll be one of four catchers on the Bossier Parish roster, and he knows he’ll have to earn playing time.

Blake Lobell’s journey to Eunice started last summer when he attended a camp at LSUE, which included players with the Louisiana Nationals organization. LSU Eunice sent coaches to watch him pitch at a tournament in Lake Charles two weeks ago, resulting in an offer from the Bengals.

Blake Lobell, who was a first -team District 10-2A selection and a second -team All-Parish choice as a utility player, said he was fortunate to attend the camp last summer at a time when many functions were shut down because of COVID.

“Yes, it was missed opportunities, missed innings for a lot of people, but we kind of turned it around and made it positive and were able to kind of work on our craft a little bit, throw a lot of bullpens and stuff, and it helped a lot,” Blake Lobell said.

Blake Lobell, who pitches and plays third and first base for the Bulldogs, said there’s a possibility he’ll be able to do the same in Eunice.

“Of course I want to pitch, and if I get the chance, I’d love to play third and be able to swing it, but if I’m going to continue further than juco, it’s going to be as a pitcher,” he continued.

“They see potential in getting me bigger, stronger and faster.”

“Blake is probably one of the better catch-and-throw guys defensively in the area,” Blanchard said. “We put him at third because we had a pretty solid infield, and he helped us there, but then when we moved him to shortstop, he made a few plays … It was unreal. His athletic talent defensively, with his arm strength and his catch-and-throw ability, he’s really good. In the last year or two, his bat’s come a long way.

“I see him getting a chance at Eunice,” Blanchard said. “We all know his top talent would be pitching, but he’s really good defensively and hitting as well.”

Blake Lobell said choosing to go to LSU Eunice wasn’t difficult given the program’s recent success, which features seven national titles in 16 years, including one this past season.

“As a kid growing up, I always looked forward to college baseball, and my dream has always been the pros,” Blake Lobell said. “The first step’s got to be college, so I’m excited.”