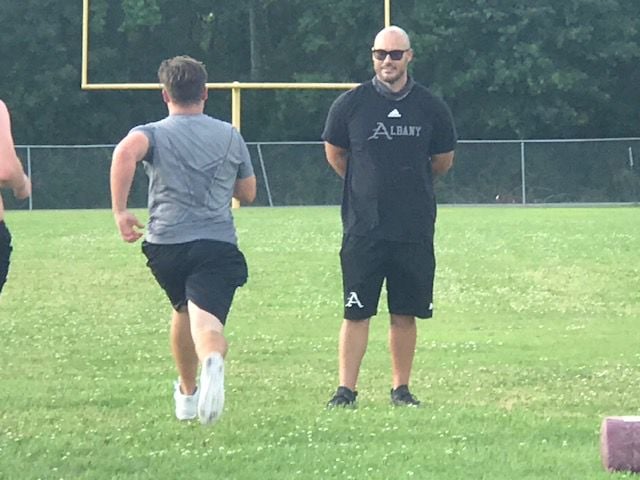 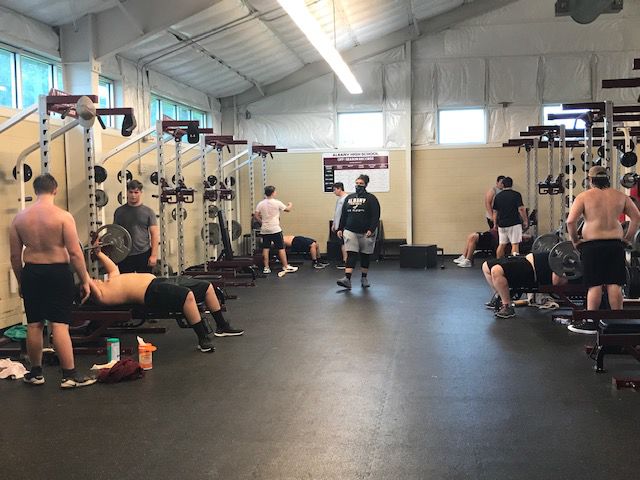 ALBANY – There are plenty of guidelines coaches are following as their teams return back to campus after novel coronavirus cut the school year short.

But for Albany football coach Mike Janis, there was one really big lesson learned as his team began summer workouts this week.

“The kids are ready to be back is what I’m learning,” Janis said as he watched his linemen go through conditioning drills. “Everybody’s happy. Everybody’s excited. Even while they’re out here sweating, it’s still nothing but smiles. We’ve got the big boys out here. They just forty yards in 10 seconds, and they’re all smiles ear-to-ear. Everybody’s happy to be back. I’m happy to finally get to see these guys again. I know we’ve done some Zooms and we’ve seen their faces, but it’s different getting to be in person.”

Tuesday’s workout had a different look to it with the Hornets’ skill players – about 20 in all – working in the weight room, while 12 Albany linemen worked on conditioning drills on the field at the same time before the groups swapped places.

Janis and his coaches wore masks and equipment in the weight room was sanitized as players worked out.

“We’re going to follow the procedures that they gave us,” Janis said. “All of our coaches will. That’s a hard line there. Nobody’s going to question it. We’ll do what they tell us to do.”

The Hornets are also doing morning and evening workouts for football, in part, to help out players who have jobs. Janis said 18 players came for the morning workout Tuesday, giving them 50 total players for the day after averaging 35-45 per workout last summer.

“With the smaller groups, if we have enough kids … we can split them up between linemen and skill positions,” Janis said. “We can kind of tailor the conditioning and the agility work to those position-specific groups.”

Janis said the workouts in the weight room were a bit of a challenge on the first day, but he also knows it’s a learning process for everyone involved.

“It’s just the monotony of getting everything wiped down and cleaned off and following those procedures,” Janis said. “It really slows down the pace of your workouts. I felt like this morning, it kind of took a little bit of the energy out of it because we’re having to clean everything off after each person uses it. That’s something we’ll have to look at and figure out how we can keep that energy up and keep the kids fired up through that workout while we do that stuff.”

Janis said that’s not the only process his will have to go through.

“Out here, our goal is to help these guys get their legs back, get some conditioning done, build some speed up a little bit, get back to where they were initially and then try to push them a little bit,” Janis said of the team’s condition work. “These guys have been out of the weight room for a long time and (are) probably experts at Call of Duty now and not lifting weights and running. Getting back in the grass and running and getting in that weight room is pivotal to getting them back … to try to get their lungs developed first and foremost is what we’re looking for.”

At the end of the day, getting to work with his team was all that mattered to Janis.

“Just to get around everybody and get to talk face-to-face and get to see all these smiles is something we’ve been missing for a long time and it’s just great to be back at it,” Janis said.

Richard Wesley Cherry — a teacher to hundreds, a mentor to man…