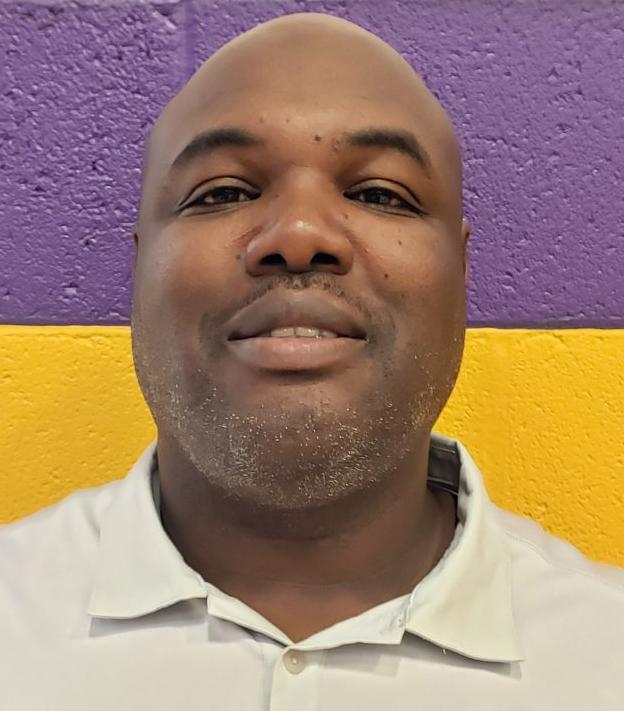 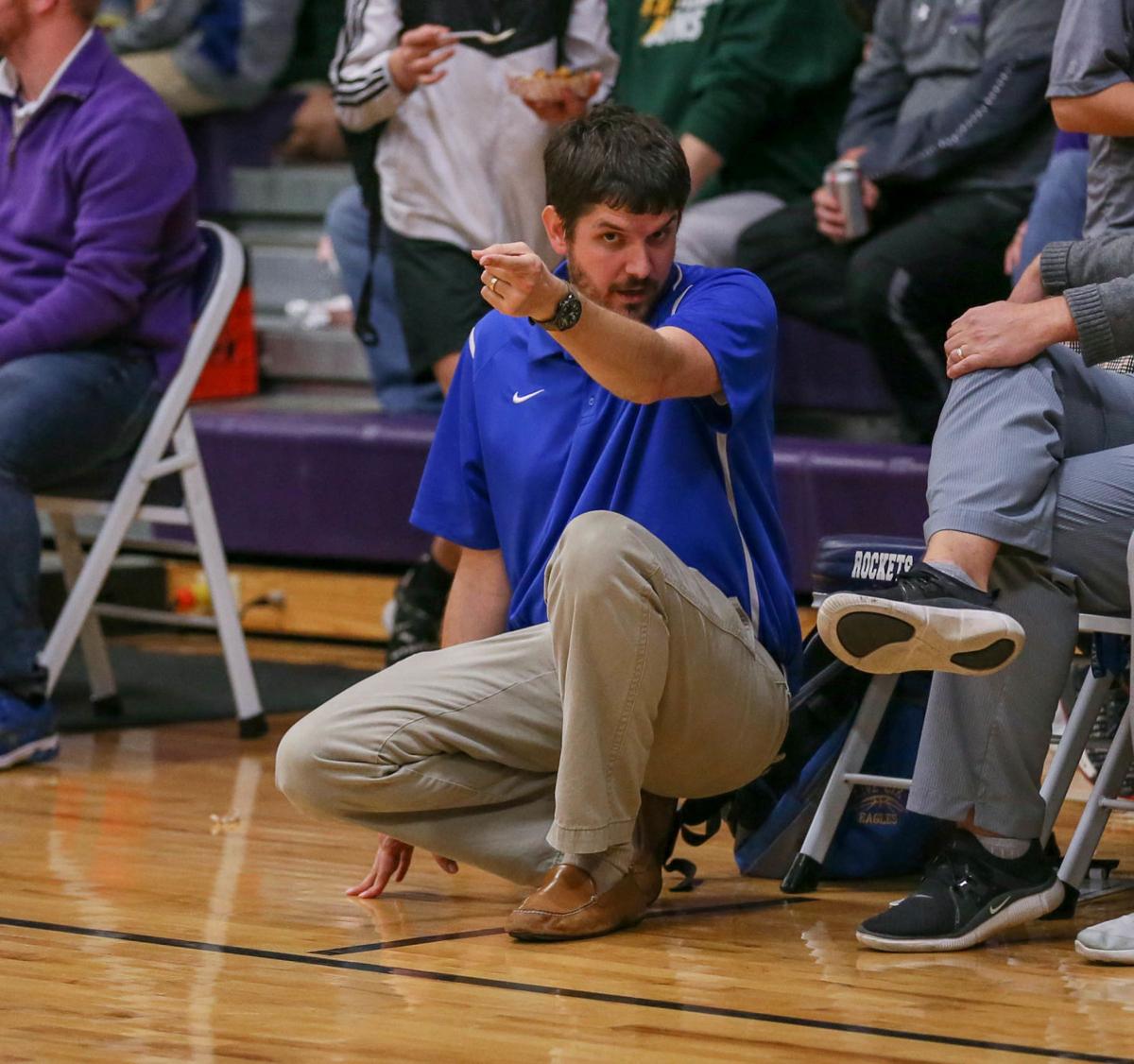 Live Oak Coach John Capps makes a point to one of his assistant coaches.

Live Oak Coach John Capps makes a point to one of his assistant coaches.

Tiras Magee admits it’s going to be a little tough trading in his purple and gold Denham Springs gear for blue and gold Live Oak garb, but it’s a sacrifice he’s willing to make.

Magee, a 1993 DSHS graduate and assistant coach for the school’s boys basketball team for the past five seasons, was named the boys basketball coach at Live Oak on Friday.

“I’m 45 years old, so all my life, I’ve been purple and gold, Denham Springs, Denham Springs,” Magee said. “It’s going to be a little difficult to switch to the blue and gold, but I can tell you I’m honestly ready to switch to the blue and gold. I never thought I would be so ready, but I am ready now that I am in position to be the head coach there. I’m excited about that, and I’m ready to show them that I want to give Live Oak everything I have in me.”

“Everything seems so surreal,” Magee said. “I’m so excited. I’m elated. Most of all, I’m blessed. I just can’t thank God enough for putting me in this position. I always dreamed about running my own program, and I have the opportunity to do that, and I’m just thankful.

“If I had to write this story out myself, I probably couldn’t have written out any better,” Magee continued. “I think Live Oak is a great fit for me. I’m familiar with the school being from the parish and working in the parish, and I’m also familiar with some of the kids from the area – even some of the smaller kids that came up through my AAU program (ISpotUp Basketball) or some kids that I even trained from up in that area. I’m really excited about it. I’m really excited to get to working with those kids. I really wish I could start today.”

Magee said he interviewed Friday morning, and Live Oak principal Beth Jones called him shortly after to offer him the job.

“I really appreciated the respect and the admiration they had for me,” Magee said. “It was definitely mutual. Man, it’s just a great feeling to be wanted, and they definitely made me feel like I was wanted there.”

“It seemed like a perfect fit,” Cassard said. “He comes highly recommended. After interviewing him and talking to him, I know he’s the right person for us. I can’t wait to get started with this guy. He’s full of life – a lot of knowledge in basketball and been around the game for a long time, so I’m pretty pumped up about this hire.”

Magee takes over for John Capps, who guided the Eagles to the playoffs in each of his three seasons as head coach. Capps said he stepped down, in part, because his wife has some health concerns.

“I had some discussions with Beth (Jones), and we talked about the balance and how it was tough,” Capps said. “We decided that maybe it was time to go in a different direction and let somebody else come in and take over. I appreciate Beth and Coach (Brett) Beard and everyone else that was associated with giving me an opportunity at Live Oak. It was great little run there as head coach. I’m going to miss the kids, but sometimes this is life and sometimes you have to make tough decisions.”

Magee praised Capps’ work with the program, and he’s looking to build on it.

“Coach Capps has done a great job with that program,” Magee said. “He’s had some great teams there, and it’s always been fun when we play Live Oak. We know Coach Capps will have those kids ready. The thing about the program is it looks like we’ll be getting some good kids in that are eager to learn that may be hungry for a change, and hopefully they can buy into the things that I want to instill in the program.

Magee is also looking to put his own stamp on the program and is looking to establish relationships with the Watson area’s Biddy Basketball and junior high programs in an effort to bring some familiarity.

“We’re going to start on the defensive end and then we’ll work our way to the offensive end, but everything is going to start on the defensive end of the floor,” he said of the type of basketball he's looking to instill in the program. “You’ll see my kids getting after it, diving for loose balls, standing in front of people taking charges, maybe battling kids that may be physically stronger than them but battling them and battling their tails off to try to get a rebound just so we can try to secure a win.”

A plus for Magee is that he’ll continue to coach in District 4-5A, against Denham Springs’ Kevin Caballero, Walker’s Anthony Schiro, Scotlandville’s Carlos Sample, Zachary’s Johnathan McClinton and Central’s Sid Edwards, who was named the school’s interim boys basketball coach earlier this week while adding to his football coaching duties.

“You always want to be associated with the best,” Magee said. “I feel that this district is the best district in Louisiana. I think it’s the toughest district.

“Those programs are respectful programs. I just want to make sure I can get Live Oak up to the point where we are respectful and be able to compete with those guys as well. It’s going to be fun. You always want to compete and have fun, so it should be fun for the most part. I’m saying that right now until you have to go up against a Scotlandville, but it should be fun.”

Capps said he will continue to teach at Live Oak and will be keeping a close eye on his former team.

“I’m going to be rooting for Tiras,” Capps said. “He’s been a great guy. I wish him nothing but the best. I hope they’re very successful this year, and I told the guys I was going to be their biggest fan. I hope they make me look bad this next year.”

Magee also offered his thanks to Caballero and Denham Springs High.

“He has been nothing but a father figure to me, a great mentor to me,” Magee said. “He taught me so much about … not only basketball, but how to be a man. How to handle situations. Everybody at Denham Springs has been very helpful to me, and I just really appreciate that. I think that helped me grow. For them to be excited for me to have this opportunity is just a testament to the love and respect that they have for me, so I’m really excited about that.”

Robby Dale Font, Sr., passed away April 29 at his home in Livi…